Home » Going to School in Adyar

Going to School in Adyar 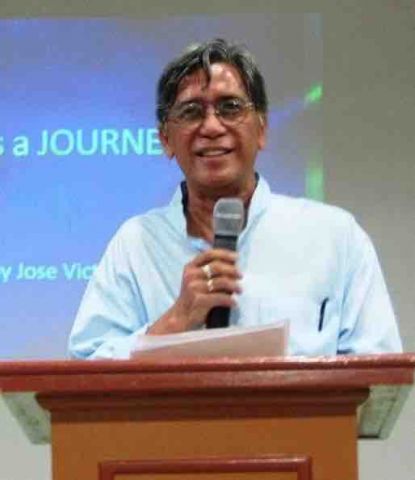 Victor Peñaranda, a theosophical leader in the Philippines and internationally, will be the lead speaker at the TSNZ Convention in Albany in January. Victor’s experience in Adyar, the international centre for Theosophy, influenced him powerfully. He enjoys recalling that time.

Once upon a time, I went to school in Adyar. It was in the years 2003, 2004 and 2005. The landscape of that experience has remained inviting, even after so many years so I’ve chosen to return, using a portal of memory.

Every year the Theosophical Society International, with headquarters located in a section of Chennai City called Adyar, offers a package of courses through a programme that is known as the School of the Wisdom. The event is usually held for a period of four weeks towards the end of the year (late November to mid-December) and then another four weeks (early January to early February) the following year. During school break, the International Convention is held, from 26 to 31 December.

Classes are usually held on the second floor of the Blavatsky Bungalow. Accommodation for international students is available at reasonable rates at Leadbeater Chambers, a three-storeyed building with spacious rooms and high ceilings, originally constructed in 1910. In front of the Chambers is a building that serves as a dining hall and offers Western-style vegetarian meals. Students can also stay at the New Quadrangle building. In front of the Quadrangle is the Bhojanasala (meaning “a place to eat”). The ground floor has an inner courtyard and modest dining facilities that serve Indian vegetarian meals, while the second floor has a dormitory for visiting theosophists. The School did not charge registration or tuition fees, but we made modest contributions to the fund for the upkeep of Blavatsky Bungalow.

When my wife Jo and I joined the School, we were billeted at Leadbeater Chambers but often had our meals at the Bhojanasala. We only stayed for the School’s initial four-week programme from November to mid-December. We were then working and residing in the Kingdom of Bhutan. We would visit India before going on our annual home leave in the Philippines.

[banyan tree] The School of the Wisdom was opened in 1949 by C. Jinarajadasa, the fourth International President, as a successor to an earlier effort named Brahma-vidya Asrama which was started by Annie Besant. The work of this School gained steadily under the guidance of succeeding presidents: N. Sri Ram, John Coats and Radha Burnier. Geoffrey Hodson was Director of the School for four terms. He once brought the School of the Wisdom to the Philippines and organised a theosophical course there from 20 January to 11 April, 1971.

Being in new surroundings I was curious and adventurous. What Adyar and the School had to offer was not at first apparent to newcomers, like me. Now I realise the value of Taimni’s words:

…I think this work of the School of the Wisdom should be geared to the problem of Self-discovery. …the discovery of the self within ourselves by ourselves… It is also because the most powerful stimulus you can apply to a human soul for its spiritual unfoldment is to arouse in it the urge to find its Divine Centre.1

This sacred centre was at the core of C. Jinarajadasa’s inaugural address on 17 November, 1949 when he said:

It is the purpose of a School of the Wisdom to bring each student to survey things ‘from the centre.’ This means, first, that every possible event or experience in the universe, not merely in the mechanical evolutionary processes but especially concerning every revelation of mankind, has to be brought into the circumference. All these aspects have then to be surveyed as from the centre, so that each aspect is seen in relation to all other aspects.

For a month each year for three years, we studied a wide range of subjects related to Theosophy in a concentrated and sustained manner. We had teachers we admired and some of them became our friends. We also realised that we were learning aspects of the Ageless Wisdom from people not only who knew what it meant, but who have made of it a way of life. And that makes a lot of difference to a student of life.

Our instructions upon arriving in Chennai whether by plane or train was to take a taxi and instruct the driver to go to Adyar where the alamaram is located. Most taxi drivers do not know the Theosophical Society but they know the alamaram, referring to the oldest and largest banyan tree in the city. This imposing landmark has become synonymous with the grounds occupied by the International Headquarters of the Society. It is a place where man-made structures and monsoon wilderness blend, where we saw our first jackal and mongoose, where pilgrims and devas (angels) seem to co-exist.

When Jo addressed our classmates and teachers in 2004, she said:

[John Algeo helping a student after class] School life in Alamaram extends to the lessons imparted, in one way or another, by the resident plants, animals and angels who have been very helpful in making our stay here so pleasant and memorable. There is also a school of meditation during walks to the beach, visits to the shrines; and also a school of service during visits to the young and old beneficiaries of the Society’s work: the Olcott School, the HPB hostel, the social welfare centre, the animal dispensary; also in the libraries, the bookshop and the museum.

But what really made the School conducive to learning were people: the students, the teachers, the resident theosophists. They were friendly and generous. When we arrived in Adyar, we were somehow induced to harmonise with the natural environment and the persons we met. It made a lot of sense. Sri Ram once said:

In the School of the Wisdom there should be at all times a spirit of genuine friendliness and harmony, so that it is a pleasure to listen to what each one has to say, be it an expression of a view or the mere statement of a question… If each can be vibrant in himself, responsive to the other, and friendly always, each one can be helped by the magic touch of others.2

We became part of a tradition that knows how to listen, care, cooperate and respect silence. Those of us who have been attending study meetings, conventions and retreats were able to draw lessons from the atmosphere of learning and solidarity created by being together in Adyar. In 2003, I wrote two poems celebrating my experience, using the old typewriter in the Blavatsky bungalow. In 2004, some of us began to write articles on Theosophy as part of our reflection rather than as assignment. I felt comfortable sharing my work in class and in discussing it with fellow students. Now I know why: the School allowed us to become a fellowship of learners who could openly give and receive.

[Teachers and students dialogue led by Director, Dolres Gago] The School of the Wisdomoffers a portal to self-discovery. This can be best achieved if one has a love for knowledge, a healthy capacity to imagine, and genuine affection for fellow students. The School is not meant to make theosophists repositories of ideas or a fountain of scholarship. Joy Mills said in her message to the School of the Wisdom in 1971:

In the setting of a school there is also generated an atmosphere in which true education can take place. This is more than learning facts, more than a comprehension of ideas; it is, essentially, the calling forth from each individual of his own divine potential. Coming together as students, we call forth from each other the creative possibilities of mind and heart; new insights are born and the wisdom is given life and power.

We are gently reminded that those who study Theosophy are engaged in an inspired and creative endeavour. It will bear fruit in whatever profession or enterprise the student is involved. Theosophical learning continues beyond the walls of the classroom and beyond the period of intense education. Life becomes the school without walls. Principles and practice become an alchemy of one. Students continue the process of their education by being involved in communities where the seed of Theosophy is needed, planted, and given a chance to bloom.

Taimni once suggested in 1964 that the School should encourage its students to engage in research projects that can be done by a network of interested and committed Theosophists from different Sections of the Society. He made special mention of producing an encyclopaedia of Theosophy. This project was realised in 2007. To what extent the making of the Theosophical Encyclopedia was provoked by Taimni’s call, it is hard to say. What I know is the heart of Adyar can beat anywhere in the world, in places where theosophists act decisively and cooperate kindly, as a nucleus of spiritual learning and service.

2N. Sri Ram, Message to School of the Wisdom in the Philippines, 1971

Victor Peñaranda has worked as a journalist and capacity-builder in community development and governance in the Philippines, the Kingdom of Bhutan and the Republic of Macedonia. He has written and published three collections of poetry. Victor is married and has three children. His wife is a fellow theosophist.