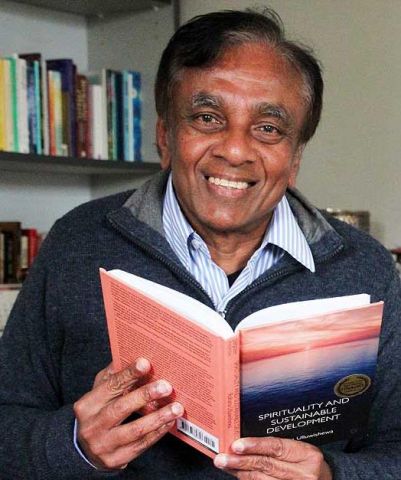 International Book Awards Finalist, Rohana Ulluwishewa was an Honorary Research Associate at Massey University in Palmerston North. He has received international acclaim for his new book as it addresses ways we can begin to make necessary changes in the world. Rohana’s approach will appeal to all theosophists.

Rohana Ulluwishewa gallantly addresses the fact that easing poverty and inequality, developing environmental sustainability and increasing human happiness remain universally elusive goals. He demonstrates that the source of this lack of success lies within each of us; in the form of our greed and selfishness. While most approaches to these world problems focus on changing external situations, Rohana claims that the growth of material wealth is unsustainable while we remain unchanged in ourselves and continuously fail to develop equality.

Traditionally, religions have encouraged unselfishness and urged consideration and kindness to others. However, many do not embrace these principles or apply them to the great problems of the world: poverty, inequality and lack of environmental sustainability. Rohana shows that as we grow spiritually, selfless love can lead to inspired development delivering happiness to all through creating a better world.

From the Spirituality and Sustainable Development foreword by Dr John Ikerd, Professor Emeritus of Agricultural Economics at the University of Missouri-Columbia (USA) through to the detailed index, reference notes and epilogue, this book by Rohana Ulluwishewa is not only evidence of scholarly endeavour but also an interesting, challenging and engaging read, especially for theosophists, as so much of what Rohana has to say resonates with the theosophical approach. He suggests ways we can move from theory to practice under headings such as: What is spirituality? Global economic system from a spiritual perspective; Development without spirituality; Towards a spirituality-based development. Rohana Ulluwishewa says this is not an impossible mission when we are strengthened by God, meditation and study.

From his Epilogue: Changing Ourselves to Change the World

What is to change within us? As has been discussed in this book, it is nothing but our self-centredness and greed for material wealth and power. We have to reduce these negative attributes and inculcate selfless love. This is transcending our ego-based state of consciousness and is the next step in human evolution which brings happiness and prosperity to all.

Rohana Ulluwishewa was an Associate Professor at the Sri Jayewardenepura University in Sri Lanka. After gaining an M.Sc. from the London School of Economics, UK, he completed his PhD at Kyushu University, Japan. In his thirty-year academic career he has worked as Senior Lecturer at the University of Brunei Darussalam, and Visiting Fellow at Wageningen Agricultural University, Leiden University in the Netherlands, and at Leeds University, UK. Rohana was a consultant for national and international development agencies and has been published in numerous international journals. He was also an Honorary Research Associate at Massey University in New Zealand, where he currently lives.