Home » The Courage of Commitment

The Courage of Commitment 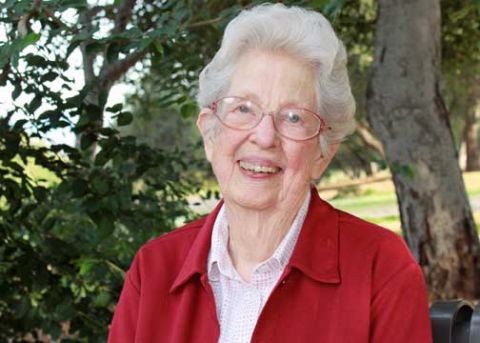 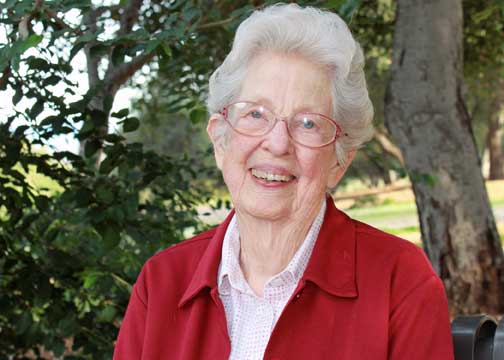 Custom and habit may lead us into patterns of thought and action which, by their very repetition, seem to be lacking in freshness and spontaneity. Precisely because the theosophical philosophy presents us with a panoramic view of life, with great ideas whose grandeur dwarfs our normal petty concerns, we may often feel inclined to retreat into the security of a philosophical cave of speculation rather than confront the actualities of existence in terms of a positive commitment to action. To what extent can we become committed? Is there a manner in which we can act so spontaneously that action, arising out of an inner commitment to principle, meets the need of the moment with a freshness appropriate to that need? These, surely, are questions which call for serious consideration by the theosophical server. As members and friends of the Theosophical Society we are challenged to engage in a dialogue with the world, but for such a dialogue to be effective we must probe the nature of our own commitment.

The neutrality of the Society as an organisation, the emphasis upon complete freedom of thought for every member, the absence of authoritarian or credal statements that define (and thus delimit) Theosophy, these may serve as cloaks in which to wrap ourselves as protection from the cold winds of the world's needs. True freedom of thought, however, a freedom in which we examine with a mind unprejudiced by the past not only the great ideas which are the principles of the Wisdom but also their implications in terms of ethical and moral action – should leave us vulnerable, capable of being touched by the problems of humankind. Love, like freedom, is a certain vulnerability of the spirit which keeps us ever open to hear the cry of all who suffer; out of such openness there arises the spontaneous act to meet the need of the moment.

In writing on the question of the Society's neutrality, a past International President, Mr N. Sri Ram, said:

What is called neutrality really means that a member is not committed to anything besides the Three Objects of the Society and each must have complete freedom to understand and disseminate the Wisdom according to his own temperament and capabilities. A society which stands for Wisdom, which induces right action, cannot be neutral as between right and wrong. But in matters with regard to which differences of opinion may arise, the Society acts not as an organisation but through its individual members. If the members do not apply Theosophy in such ways as may be possible for them, the Society will soon become an inert or dead organisation.

The fact that we cannot commit the Society to certain courses of action should not be an excuse for the failure to commit ourselves, where right and wrong may be involved. The world's problems are too grave, humanity's needs too desperate, for apathetic non-involvement; misery, ignorance, injustice, poverty, these are ourconcerns because we are dedicated to the proposition that humanity is one brotherhood.

Let us not be misled by too easy an interpretation of our First Object, assuming that 'to form a nucleus of the Universal Brotherhood' it is enough that we have joined hands with others of like intent and may henceforth enjoy the security of a nucleus condition which demands little thought and less action. Editorialising on this very subject, a past General Secretary of The Theosophical Society in England, Mr L. H. Leslie-Smith, stated:

To be a nucleus is a very different thing from establishing world brotherhood. Some sentences in The Mahatma Letters to A. P. Sinnett may throw light on this. First, “you … are unable to understand our ideas upon the Society as a Universal Brotherhood.” The Society as a Universal Brotherhood – a body whose members will actually be a brotherhood without distinction and therefore universal, excluding none who will help to make the Society that brotherhood. Then it can be a nucleus for a brotherhood of all mankind. As Theosophists we shall have good will towards all, but our real task would seem to lie in being all-inclusive, denying membership of the Society to none who are willing to commit themselves to the practice of brotherhood. The same idea comes out of a second quotation from The Mahatma Letters: “The Chiefs want a ‘Brotherhood of Humanity’, a real Universal Fraternity, started; an institution which will make itself known throughout the world and arrest the attention of the highest minds.” A fraternity, an institution, of people whose attitudes and abilities and mutual relationship shall be so strikingly fraternal that the highest minds perforce take notice of it and it is known throughout the earth. Is it not then desirable to make clear and unequivocal what membership of the TS really involves?

The phrase 'to form', with which the First Object begins, can mean, as Mr Leslie-Smith further points out, either 'to exist as' or 'to create'. The first meaning leads to a state of inertia, in which actions become repetitive; the second meaning lends a dynamic quality, to both attitude and behaviour so that we engage ourselves creatively in action that must always be spontaneous and new, in accordance with the needs of the present. Our commitment to the principle of brotherhood is ever tested in the courage we bring to such creative engagement, that refuses to be daunted by any obstacles or defeated by the magnitude of the task that lies before us. The vigour and vitality of the Society arise out of the lives of its members; its impact upon the world, its transformative power, its regenerative force, are all dependent upon what we, its members, bring to this movement and upon the manner in which we act out daily the implications of the principles to which we have given an inner allegiance.

Granting to all the full freedom of thought which we claim for ourselves, preserving the wise neutrality of the Society which permits of divergent views, we may yet examine the practical import of the great ideas and universal principles of the Wisdom, gaining ever new insights into those principles as we seek to bring them to bear upon the problems of our times. Let us not be afraid to chart new directions, to act in a new manner, to speak with new meanings; let us possess the courage of our commitment to a society whose objectives embrace a totality of understanding and so act that all will know that for us, as for the Adept Brothers, the term ‘Universal Brotherhood’ is no idle phrase. 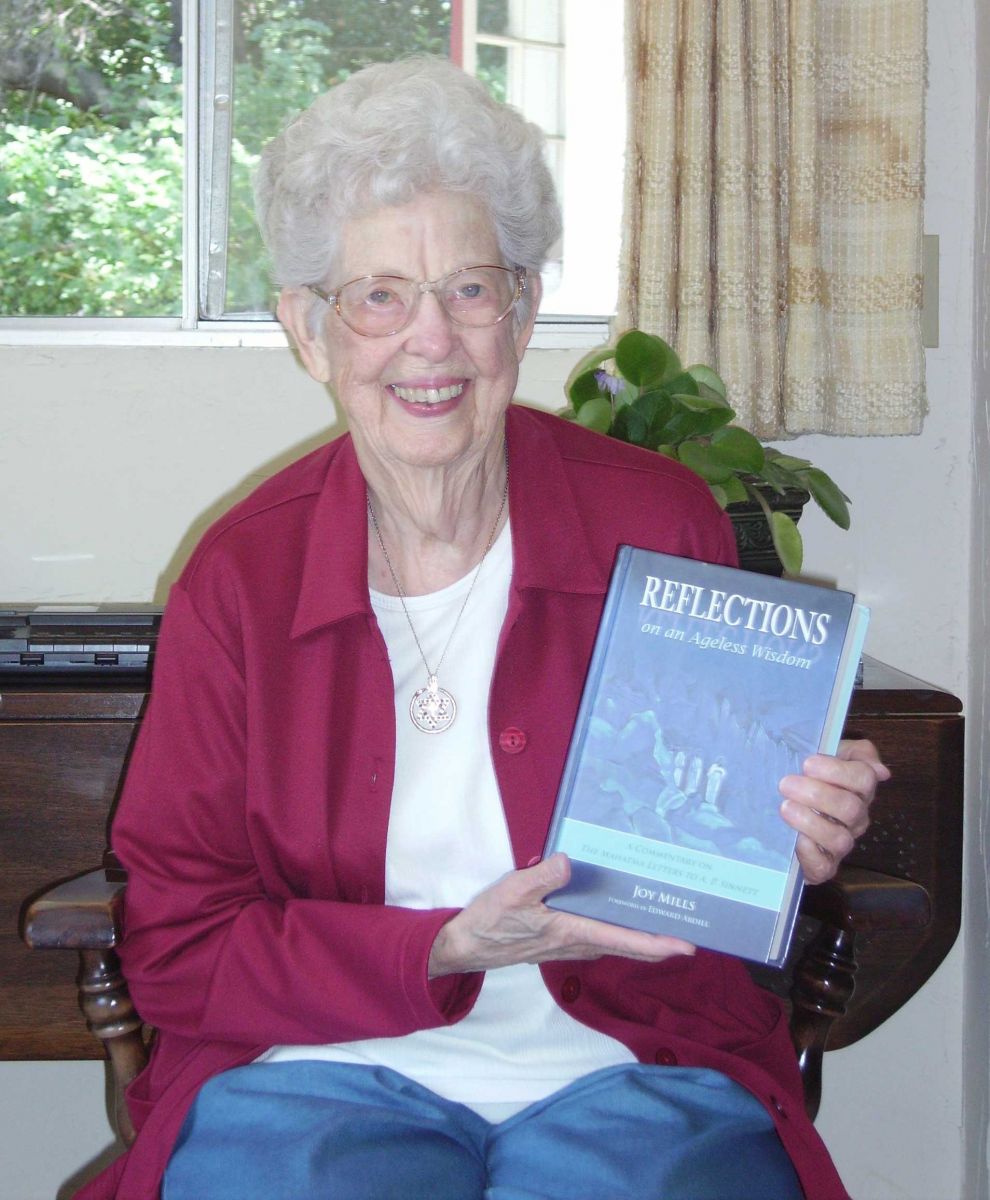 Joy Mills with her highly praised book, Reflections on an Ageless Wisdom

Joy Mills, a teacher by profession, has devoted most of her adult life to the work of the Theosophical Society. Joining the Society in 1940, she has served in a number of capacities, including that of National President of both the American and Australian Sections of the Society, as well as International Vice-President. Her lecture tours have taken her to more than 50 countries and Society branches. She has published several books, including a history of the American section, 100 Years of Theosophy, and her writings have been published in theosophical journals throughout the world.

Elected to the office of National President of the Theosophical Society in America in 1965, the first woman to serve in that capacity, Joy Mills was re-elected for three successive terms. During that period, she founded Quest Books as well as a number of other programs supported by grants from the Kern Foundation. Resigning office in 1974, when she was appointed the Society’s International Vice-President, Joy took up residence at the world headquarters in Chennai, India, continuing to tour and lecture throughout the world.
Returning to the States in 1980, Joy Mills became Director of the Krotona Institute School of Theosophy, greatly expanding its educational and training programs. Called to accept the office of National President of the Society in Australia, Joy resided there for three years. Returning to her home in Ojai, CA, she continues to teach at the Krotona School and also serves on the Board of Trustees of the Krotona Institute.

Joy Mills continues as a member of the international society’s General Council, its governing body, and has made frequent trips to its Indian headquarters. Now in semi-retirement, Joy devotes most of her time to writing while still presenting some classes at Krotona.

Her scholarly commentary on The Mahatma Letters to A.P. Sinnett, titled Reflections on an Ageless Wisdom, was published in 2010 to much acclaim.

With kind permission, from the Quest Books website where you can also find a very long list of available titles by Joy Mills: http://www.questbooks.net/author.cfm?authornum=105