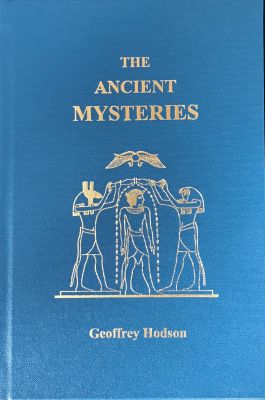 The Hidden Light and Life of Ancient Egypt

This new book takes the reader beyond the confines of orthodox conceptions, and with clearly expressed interpretation of the symbology of Egyptian religious art, it opens up a unique and profound understanding of this fascinating civilisation. Drawn not from academic studies, but from the realms of implicit insight, it has a clarity and compelling logic which allow it to stand on its own merit. The magnificent monuments and art of Egypt’s past which remain have an irresistible attraction, yet a far greater treasure lies hidden beneath the surface - the Ancient Mysteries - the wisdom and power of which was the impetus and driving force behind the rise of Ancient Egypt to the stupendous heights to which it rose over thousands of years.

In this posthumous publication, Geoffrey Hodson interprets Egyptian religious art in relation to cosmogenesis, the principles and laws governing the universe, and the potential development of human faculties far beyond current conception. He reveals the Mysteries as the enlightening and quickening power behind the great sweep of human evolution on earth and its successive civilisations.

In acknowledgement of the author’s contribution to knowledge in this area, this well presented volume is being made available at a price below the cost of production.