The Voice of the Silence - is it only for Mystics? (Part 1) 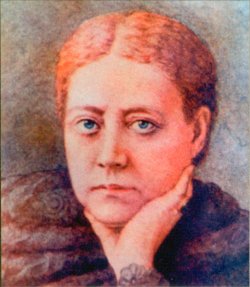 Helena Petrovna Blavatsky dedicated The Secret Doctrine to all true theosophists, in every country and of every race, for they called it forth, and for them it was recorded.  In the case of Isis Unveiled, HPB dedicated the same to the Theosophical Society to study the subjects treated in that book.  The Key to Theosophy was dedicated by her to all her pupils that they may learn and teach on their own.  The Voice of the Silence was, on the other hand, dedicated to the few.  It is not indicated who are the few to whom this book has been dedicated.  Besides, it is also not the case that a book is meant only for them to whom it may have been dedicated by the author.  Very often it is the case that a book may be dedicated to one or more persons, but it is available to anyone who wishes to buy and read the book.

In the preface to The Voice of the Silence, HPB clarifies that this book is derived from the book of The Golden Precepts and while saying so she also clarifies that The Golden Precepts is one of the works which is put in to the hands of mystic students in the East as the knowledge of the precepts is obligatory.  Towards the end of the preface, HPB further states that it has been thought better to make a judicious selection from those treatises which will best suit the few real mystics in the Theosophical Society and which are sure to answer their needs.

Perhaps these words of HPB have prompted some people to think that The Voice of the Silence is a work that is meant only for the real Mystics in the Theosophical Society. No doubt the way HPB puts it, we can clearly conclude that The Voice of the Silence and the two other fragments included in the book are suitable for the mystic students.  She also goes on to say that the mystic students are those who will appreciate the words of Krishna and quotes from the Bhagavad Gita (Chapter II, verses 11 & 12): “Sages grieve not for the living or the dead.  Never did I not exist, nor you, nor these rulers of men; will any one of us ever hereafter cease to be.”

However, it is difficult to conclude that this book is not suitable for others or that no one else other than the mystic should read it.  On the other hand she herself indicates on the cover that this book is “for the daily use of Lanoos (disciples)” which goes to show unequivocally that it is meant for all aspirants and not only for the mystics. It would be a great loss if this wonderful little book, written in sublime poetic language with vivid imagery, is kept out of the reach of lay students and disciples. In Madame Blavatsky’s own lifetime, the book had become popular among Theosophists. She wrote to her sister Mme de Zhelihovsky in February 1890, “The Voice of the Silence, tiny book though it is, is simply becoming the Theosophists’ Bible.” We cannot say the Bible is only for mystics and not for lay followers. As one commentator puts it: “Probably the best way to take the whole treatise is to assume that it is written for the absolute tyro (a beginner or a novice), with a good deal between the lines for the more advanced mystic.” (Frater O.M.)  His Holiness the Dalai Lama says, “I believe that this book has strongly influenced many sincere seekers and aspirants to the wisdom and compassion of the Bodhisattva Path.”  D. T. Suzuki, the Japanese author, says, “Here is the real Mahayana Buddhism.”

It is not for nothing that HPB indicates to us that the book should be put to daily use.  The more one reads this tiny book (it fits into only 20 A4 size pages), the greater depth one reaches.  Progressively it indicates to us how much more work we need to do in this life and in the lives after.  As we proceed with the book, it holds a mirror to us to show where we are and it further indicates to us the path that we have to take.  It does not give us any false promises, it indicates to us the difficulties ahead without discouraging us and clearly indicates what lies for us at the end of the path.  Sometimes, the path is described as a thorny road, full of pitfalls, sometimes the path is hinted as a ladder the foot of which is in mire but its summit lost in glorious light. Sometimes the path is described to be across the waters going on to the other shore.  As Radhaji often used to point out, there is no actual path taking us from one place to the other but it is all happening within ourselves.

In an anecdote published in Mark Lee’s book Knocking at the Door: My years with J. Krishnamurti, someone told J. Krishnamurti that Emily Lutyens (Edwin Lutyens’s wife) in her book Candles in the Sun says that Rukmini Arundale went through five initiations in the brief span of 15 days.  Krishnamurti suddenly sat up and asked: “Do you know what initiation is?  You wouldn’t know what it is to even go through the first initiation.”  Krishnamurti went on seriously: “The disciple approaches the master who is seated at the end of a cave which looks like a long tunnel. A harsh voice booms within: ‘What is it that you want?  You are not fit for anything, go away.’  If the disciple is earnest and persistent he comes back after a while and the same voice calls out and says the same thing.  The disciple, despite the rebuff, keeps returning over a period of time.  Then one day, to his astonishment, he finds at the entrance of the cave a sculpted figure of himself; perhaps the eyes are cruel, the protruding jaw and the facial lines exude greed and avarice.  Whatever the contortions, he realises the figure is he.  As he looks it over with an uncomfortable and anxious feeling, the voice within calls out from the end of the tunnel: ‘See what you are, go away and do something.’  The disciple goes home, reflects, changes, and keeps coming back to the master.  As the disciple changes, mellows and softens, and lets go of his likes, dislikes and attachments, the figure too gradually undergoes a change.  There is no response from inside the cave.  Now communication is only with the seated figure outside the tunnel.  This process goes on till he drops most of the accretions as ego.  Then one day, the voice calls out his name.  There is great affection in the voice and the master says: ‘Come in,’ and receives him.  This is the first initiation.” (First-hand account by Dr S. Balasundaram, who was present, in his book Non-Guru Guru.)

We are fortunate to have an account of what the initial process is like from Krishnaji, who knew.  In each of the three fragments published under the title The Voice of the Silence, HPB tries to give us as detailed a view of the process involved in an aspirant’s progress as possible.  Everything in the book is not easily understood. By their very nature, esoteric instructions are never made very concrete.  Full understanding of a stage is said to come only when an aspirant has climbed that part and nearing that far.  It is not so much about understanding the literal meaning of esoteric instructions as contemplating on them and putting them in to practice step by step.

HPB has taken three fragments from The Book of the Golden Precepts and put them together under one title. It is perhaps safe to presume that these are three separate fragments and not three continuous ones. For example the choice indicated between the two paths at the end of the second fragment can only be exercised when the aspirant reaches the seventh and last portal described at the end of the third fragment. In a way, the three fragments describe three approaches to the same goal, yet in a sense they are complementary to each other.

Muriel Daw, a theosophist and a Buddhist, points out that in the original edition of The Voice of the Silence a separating line was placed under the first sentence, thereby making it a sub-title for the whole of fragment one.  The title was The Voice of the Silence and the sub-title was These instructions are for those ignorant of the dangers of the lower Iddhi.  She says that the implication of the sub-title is that the whole fragment deals with the technique of meditation including dangers which arise through the use of the psychic faculties.

As for the second fragment, to get a good grasp of its central theme one needs to understand what a Bodhisattva is. It is a Sanskrit term meaning one whose being or essence [sattva] is pure enlighten­ment [bodhi]. At a human level, any person whose essence is guided solely by the wish to attain enlightenment in order to help others may be known as a bodhisattva — the great model being Prince Gautama, who was a bodhi­sattva until the moment of enlightenment which made him a Buddha.  It is impossible to help others without wisdom, therefore the struggle for enlightenment must come first. Only then can one choose between the Two Paths. According to one account even Gautama Buddha had difficulty in choosing. It is said that after he became enlightened, he continued sitting under the tree for seven days enjoying the bliss he had found. Next he considered trying to help others with his new-found knowledge. He thought, “It is too difficult, no one will under­stand.” Then the gods persuaded him, saying: “Yes, many are ignorant; however there are some who have but little dust in their eyes.”

This article is from a talk given by Dr Chittaranjan Satapathy at the South Indian Conference at Adyar in 2015 and first published in The Theosophist, Vol.137 No.8, May 2016. It is republished here, with kind permission. Read Part 2 in the September issue of TheoSophia.

Dr Chittaranjan Satapathy has been a member of the TS in India for more than 30 years, and is now living in Adyar. In 2014, he was elected International Vice-President of the TS. Prior to that, he worked as International Secretary, Director of the Adyar Library and Research Centre and Secretary of the Olcott Education Society. In 1975 Dr Chittaranjan Satapathy originally learnt about the TS through a commemorative postage stamp issued by the Indian Government and since then Theosophy has become his way of life.