Home » Exploring the Mysteries of Existence

Exploring the Mysteries of Existence 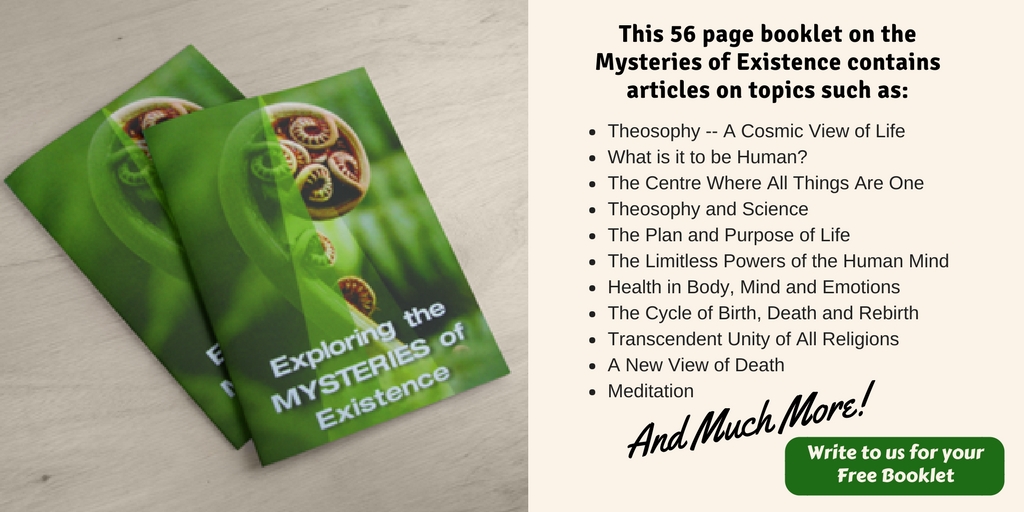 Have you ever asked questions such as:

Why am I here?

Where did I come from?

Where am I going?

Exploring answers to these questions can take us on a journey of self-discovery.

Theosophy endeavours to answer these questions through various approaches such as science, philosophy and religion without limiting itself to any of their particular assumptions or ways. Theosophy can be applied to our curiosity about our own identity and the meaning of everything in the world around us today. It does that, not with a list of simple, pat answers, but by giving us a new way to look at ourselves and the universe, a way that provides a basis for developing our own answers.

Theosophy embodies principles that have been known and taught by the sages of the past all over the world. It has been called by many names.

The term Theosophy is derived from two Greek words, theos: ‘divine’ and sophia: ‘wisdom’. However, Theosophy is not some system of thought prescribed by a deity ruling from on high, but the ‘Divine Wisdom’ that dwells potentially and universally in the human spirit, unfolding gradually through the process of evolution. It is this ‘Divine Wisdom’ within us that stirs our desire to discover who we are and to answer the other big questions.

Theosophy is the body of truths which forms the basis of all religions and which cannot be claimed as the exclusive possession of any. It offers a philosophy which renders life intelligible, and which demonstrates the justice and the love which guide its evolution.

The Theosophical Society is composed of students, belonging to any religion in the world or to none, who are united by their approval of the Society’s objects, by their wish to remove religious antagonisms and to draw together men of goodwill… Their bond of union is not the profession of a common belief, but a common search and aspiration for Truth. They hold that Truth should be sought by study, by reflection, by purity of life, by devotion to high ideals, and they regard Truth as a prize to be striven for, not as dogma to be imposed by authority.

Fill out the form below to receive a free copy of the book, ‘The Mysteries of Existence’ in which you will find articles on Science, philosophy and the Theosophical world view.

Alliteratively you can download a copy of the booklet from here.