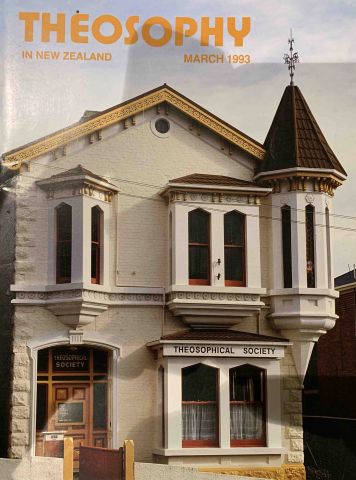 And I heard these myths, (about Rangi and Papa) and I heard the traditions of my Dad telling me of the violent times 200 years ago, before the Europeans arrived. The tribes were caught in perpetual violence and in that regard it was just as well the Europeans came.

I believe it happened something like that in Scotland – and there were no winners there — it was simply a perpetual bookkeeping of who beat who. Now the same thing happened with my elders. My male forbears, according to the traditions, never lasted beyond 35-40 because they were all carrying weapons, and each one of them got bumped off to help this bookkeeping thing that was going on. I had one ancestor who survivied that as an old man, but he got bumped off too, by black magic. They didn’t take a weapon to him, but they found him alone, grey, old, decrepit, but they didn’t have the guts to violate him with a weapon so they used magic on him and he died. It didn’t do the family much good because when his grandson came home and found him sprawled out, he tuned in to whoever it was and said ‘hey, I am going to do that guy in’, and by the weekend his head was cut off. So it was a pretty violent, terrifying sort of time. There’s a proverb that comes from that time, a brilliant proverb, a very important one, it commences, mata wahine mata whenua . . .  and means this: menfolk of the time I have been talking about destroying themselves for two principles: one, for the honour of their women, and two, for the sanctity of the land. They would destroy themselves absolutely; and I belong to that tradition.

So that’s another part of my world view, I value tremondously the womenfolk of my family, and the women folk who are here, because I would extend and expect no less a courtesy than the protection that I would want for my daughter and my wife. And we all have to get there, you male things, because I think males like us are the problem! So there I am saying to you of that proverb, I inherit that proverb. And I think that’s valid even now, and ought to be, we ought to protect women and protect nature, our environment.

I have my grandson, a beautiful grandson. One! I had five children, all of them are over twenty-three and all I can manage is one grandchild! That’s the kind of macho virility I imagined I had and was passing down in the DNA: it got stuck somewhere! Never mind, this grandson of mine is a beautiful blue-eyed one, he’s marvellous, and I’d do anything for him, and I guess I would want some of the goods of this world for him, and I’m not meaning material goods, let me get that clear. The kind of goods that I’m talking about is the goodness of our humanity passing to him. I have a problem with that because my daughter-in-law has a mind of her own too. Never mind, I’ll get through there I’m sure. However, we are all caught in the same thing, we would hope that what passes to our grandchild is something in advance of where we are, not only knowledge but this other quality, what I think has to be the future of our transformation as people. Two hundred years ago, the New Zealand community was only Maoris and cousins of theirs and tribes of theirs, and then Europeans arrived.

My forbears signed the Treaty of Waitangi by the way, so I’m committed to the honouring of that document, and I’m committed to encounter the flow of people from other parts of the world, and this takes into account the modern arrivals from Asia, from other parts of Europe, from elsewhere. I notice some of my non-Maori community folk getting all anxious about the number of Asians with BMWs up my street! But it seems to me it is only a rerun of how it was 150 years ago. A higher technology, a higher innate power, but all those things to me are only material expressions of that level of development. I am talking about a higher level of power, and in that sense it seems to me it is to do with timelessness, it is to do with spacelessness, because our senses, as I began telling you, operate only on the five sensory perceptions in the fragments of the now.  I think we have the potential to operate at another level beyond the now. Anyhow, I will leave that thought with you.

Now let me talk about language. As I have said to you, I have been interested in English literature, and in that area I can say that those of you who are English-speaking, those of you who understand the poetry and the drama of our European traditions, I share with you and I have walked with you. And it’s a wonderful tradition, it’s a very eloquent poetic community of people, and in that way I am pleased to be able t join with you in English and walk that way. Maoridom too, has a tradition, a rich poetic tradition of song, and chant, and history, and when I look that way I understand that it must be the same for peoples of Asia and other parts of Europe, of Russia. Language is a very powerful communication tool for human beings.

I am worried about the use of English language because I think English speakers are careless with it. I think we need to consider what it is we want to say, and to very quickly find the right words with power, and use that powerful statement, so you need only say it once, and the power strikes the rhythms of the air in such a way that that person is affected from there onwards. But I think modern media and the push to use language, English, just to communicate is not good enough for me, because you have some of the Americanisms, notions like ‘disinformation’ and all those kinds of funny words, which is a way of masking the real truth of what is being said. I think we need to go backwards from there. I think we want language to speak not from some kind of intellectual analaysis but with some kind of heart-sound. I suspect that as I have been speaking to you, you have been hearing me in your ear and in your heart. That part that you have listened to in your heart, you will know, and I will know, and it is something that we have to develop as a community of people, so that we use language to give power to the other person.

Of course there is a worry in it. The worry is that we spend so much time seeking to empower ourselves, and we get so arrogant and bloody-minded that we want power and we want the power retained, and we allow pieces of it, as it suits us and as we can manage and manipulate it, to give power slightly to other people.

Now I think that’s wrong, I think what we have to do is to use all our innate skill and force to empower others, to empower the unempowered, to empower the weak, to empower the destitute. And that’s one of the ancient notions of being Maori with power. You mustn’t be deceived by what you might see on television, where you see Maori people prancing around on the marae and looking like they are dramatising enormous exercises of power. I tell you, that’s only a projection, the real exercise of power is using that time to give power to others – it is really not the accumulation of power but the redistribution of power for the powerless. I think when we get down that track we will be a better community. And I think that some people may be surprised if they try it, because it is my experience that everything that I have, as I share and give it to other people, I feel no less empowered. It’s something like a smile, you can give a smile away and still have something left, another smile maybe. But imagine what a smile does to others, it’s as basic as that. So I’ll leave that thought with you too.

I have this thought about what is the future power, how would it manifest itself? Are there examples of it around now, is it recognisable? The short answer to that, for me, is ‘yes, of course’. And how does that show to me? First of all, it is those persons who are in tune with themselves and their world. It’s like coming to today’s meeting – Bill (Johnstone) and Bob (Bender) were outside in the street, sitting on the seat out there waiting for me, and I said, ‘wow, those guys are right in tune with where I am’, because that would be my choice too. It was lovely and cool, and the breeze was coming up Queen Street, and just the repose they had made me wind down to them. I got dug out of the garden, and if there’s something I love better than people it’s gardening! So having come from home somewhat tense about leaving all that stuff I really like doing and to see Bill and Bob sitting there, waiting for me, tuning for me, I joined the space, said goodbye to my wife, and I felt good, because for some reason I can’t explain, both those two had tuned in to me at the right level, and it’s that kind of thing that is important. If you do not tune that way, your anxieties and your tensions become part of that space, and the person moving into it has to confront that by tuning up to that (or whatever it is, sideways or downwards), but they have to tune to it, and that requires effort.

But if the tuning is right, there is a balance, there is an equilibrium, there is a peace if you like, and I guess that’s what we need to work harder at, it’s finding that balance in the same shared space. And that’s only in terms of the space that we are sharing now. When Bill said to me that I had a microphone here, a couple of bits around the place, I said to myself that I would rather not have a microphone, because it means I am talking to that wretched thing, whereas I’d prefer to be passing my eyes across you. Each one of you, without saying a word, is generating an energy back to me.

As a teacher, I know that intelligence can become saturated but if you are able to take away one or two of my shared thoughts, that would be great for me, that would be really nice.

Published in Theosophy in New Zealand in March 1993