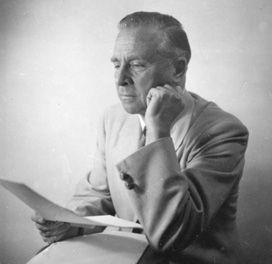 This is and audio book read out by Geoffrey Hodson, the author.

The Supreme Splendour reveals highly metaphysical and profound ideas relating to Divinity, the source of all existence. It also describes some of the processes by which universes come into being. The successive phases of their emanation such as the darkness before dawn, the dawn itself, the emergence of light, the formation of worlds, the descent of the divine ‘seeds’ or Monads who inhabit them, evolution and its consummation – all these are expressed in lucid language with the hope that a measure of the truth behind the words will be conveyed to the reader.

Geoffrey Hodson was born and educated in England. He served with distinction in the British Army during the First World War. A deep student of Ancient Wisdom and ‘religious’ in the highest sense of the term, he laboured ceaselessly for the spiritual regeneration of mankind until his death in January 1983 at the age of 96.
Throughout his seventy years of membership of the Theosophical Society he was active lecturing for the Society in America, England, Europe, South Africa, India New Zealand, Australia and the Far East.

Geoffrey Hodson was the author of some forty theosophical and other books based on occult investigations conducted by him through his clairvoyant powers. He was awarded the Subba Row Medal in 1954 for his contributions to theosophical literature.  Mr Hodson was Director of Studies of the School of the Wisdom at the International Headquarters of the Theosophical Society at Adyar in India four times and a guest lecturer at the Krotona School of Theosophy in California.

Click on the link below to hear each chapter.