Home » A Glimpse of Adyar

A Glimpse of Adyar

Young university student, Lara Sell had a memorable learning experience on many levels during her exciting visit to Adyar. 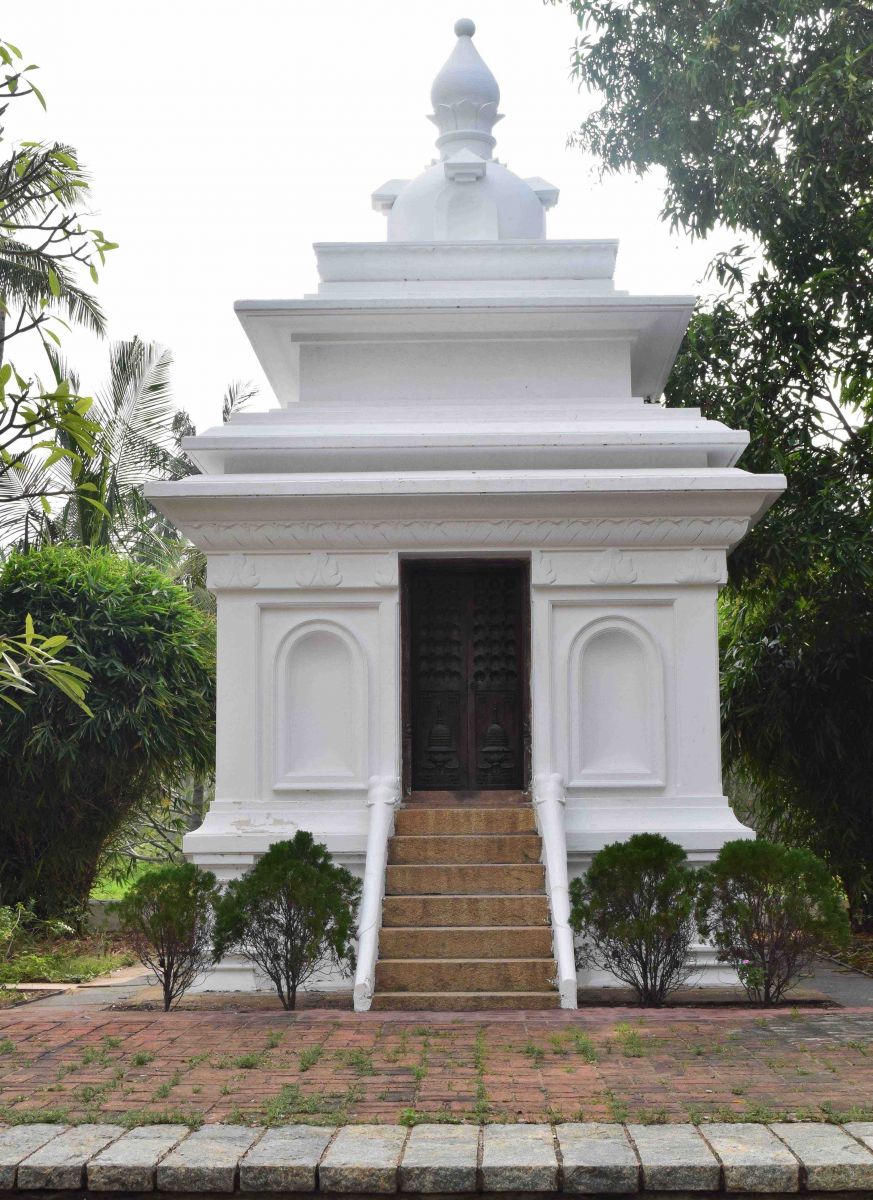 On 28 December, 2016 I embarked on a trip to the Theosophical Society's International headquarters located in Adyar, Chennai. Chennai is the capital of Tamil Nadu (a southern Indian state) known for its vibrant artistic, religious and culinary traditions as well as its heat and traffic! I attended the 141st International Convention which commenced two days after my arrival. I flew into Chennai with John Vorstermans late at night, so my first glimpse of India as we descended was of very few street lights illuminating small houses and very different kinds of trees. The drive from the airport to Adyar was lively – all the honking horns, exotic smells and colourfully clad people which all made for a very interesting first impression.

I spent most of my first morning taking a walk around Adyar. The compound is about 250 acres. There are many old buildings such as the Blavatsky Bungalow (where the School of Wisdom was later held), a library, a few temples, a big coconut tree grove and of course the famous great banyan tree. The little roads stretching across Adyar seemed to go on forever (unless you got into a rickshaw, car or motorbike). The compound has a door leading onto the beach which is opened twice each day. I managed to get up early enough to go twice at sunrise to see the lovely view.

The grounds have a very special atmosphere. I loved being able to walk through them every day. It was saddening to see the damage the cyclone had left – huge great old trees knocked over. The destruction had been worse before we arrived but some amazing clean-up work had been done to make the convention possible.

Once the convention started things got busy. The convention's theme was Beyond Illusion: A Call to Unity and began with an early morning opening followed by a lecture on Annie Besant.

Along with some very informative and engaging lectures, the convention had activities such as the Round Table and visits to various places such as the Social Welfare centre. I particularly enjoyed the Mogul and Rajput Miniature paintings exhibition at the Adyar museum. Beside the convention registration tent there was a stall with various bags and rugs for sale and beside this was a Beauty Without Cruelty stall which had some very informative posters about animal welfare. 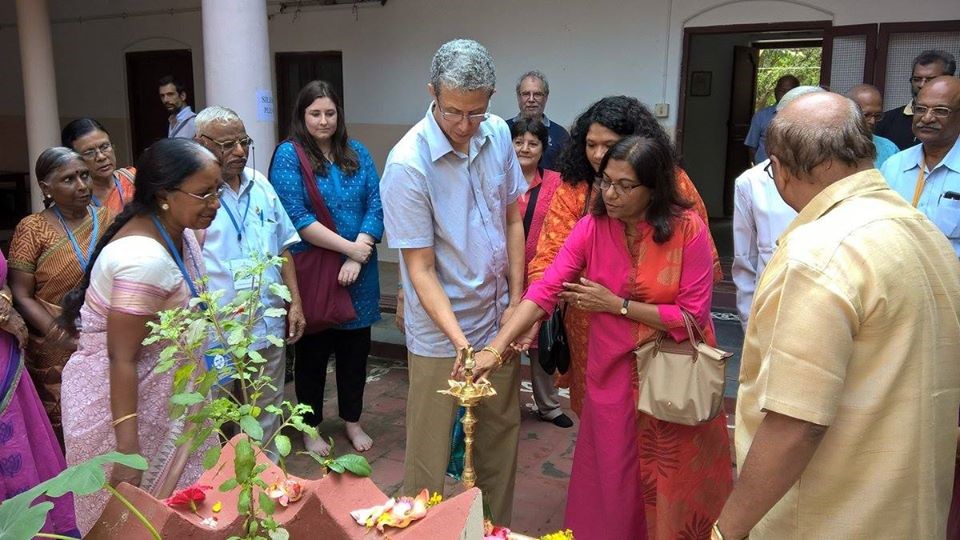 One of the highlights of the convention for me was the Global Rhythms Choir which comprised over 300 children who came to sing to us all. The choir was directed by Mr Srinivas Krishnan who did an amazing job, along with all those playing instruments. The children brought an incredible energy when they sang. This was reflected on every audience member's face as they watched and clapped along. I particularly enjoyed their version of one of Adele’s songs and their finale which was We Will Rock You (I am sure you’ll never hear this belted out by 300 kids at Adyar again!).

The convention was wonderful because it was so diverse with people from all over the world, some of whom I had met before and some lovely people I had the privilege of meeting for the first time. There was always time for a chat before or after lectures and in the dining hall over a meal. We brought 2017 in with tea, treats and singing over a bonfire.

The meals always tasted great and it was fun trying new dishes, my favourites being all the Indian breads. I also loved the Indian coffee, all the sugar is at the bottom so you pour it back and forth from a cup to a bowl so the sugar mixes and it tastes great! I have also learnt that almost everything in India is spicy (I learnt this the hard way when I broke out in sweats trying some curries!).

Once the convention was over I had the privilege of attending the School of Wisdom which was run by Vic Hao Chin, Jr. This was held at the Blavatsky Bungalow. It ran for two weeks, however I was only able to attend one week of it before I had to head home. However, I learnt some invaluable things while there.

I also attended the Youth Forum, from which we were able to create a ‘Whatsapp’ group for young theosophists to connect and discuss theosophy online. I loved the chance to hang out with other young theosophists – I spent every day with Angelique exploring Adyar and having a laugh (or what some of the older members called ‘getting up to mischief’!) I also met a bunch of younger members who were really great to get to know.

I had the privilege of driving around Chennai a lot which I always found incredibly interesting. The markets were great although I am no haggler when it comes to price. The Kapaleeshwarar temple located in Mylapore is a huge Hindu temple, each character on the temple represents a part of a story. I also visited a church dedicated to Mother Mary – it had the most powerful energy. The religious devotion was amazing to witness as it was very visible compared with what I have seen in New Zealand. 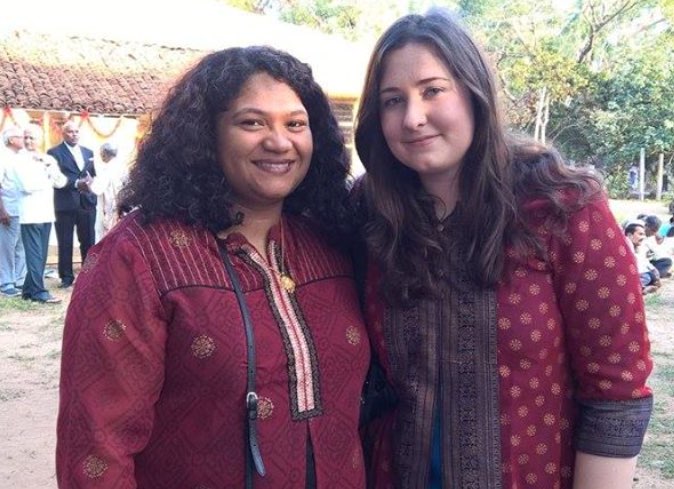 This trip was an incredible and a very special experience. I would love to attend another convention in the future as I learnt so much just by being there. I especially enjoyed the Adyar grounds, learning about the Society’s history, meeting members from all over the world and learning more about Indian culture. This is a trip that I will value for the rest of my life, words cannot convey the incredible atmosphere of Adyar (it has to be experienced first-hand). I would like to thank John Vorstermans and the TSNZ for their support towards my airfare to India, I am very grateful. I would also love to express my thanks to Tim, Lily and Angelique Boyd for having me during my stay at Adyar. I had such great laughs and fun with you guys and I can’t wait to see you all again sometime soon!

Lara Sell is a university student majoring in Psychology and Gender Studies. She is passionate about animal rights, human rights and particularly the rights of minority groups in society. She has been a member of the Theosophical Society since she was ten. Previously, Lara saved up for a trip to the Philippines where she spent three weeks as a volunteer in the theosophy based Golden Link College, founded by Vic Hao Chin, Jr. Lara has just attended the 141st International Convention at Adyar.