Home » The Ancient Mysteries: The Hidden Light and Life of Ancient Egypt

The Ancient Mysteries: The Hidden Light and Life of Ancient Egypt 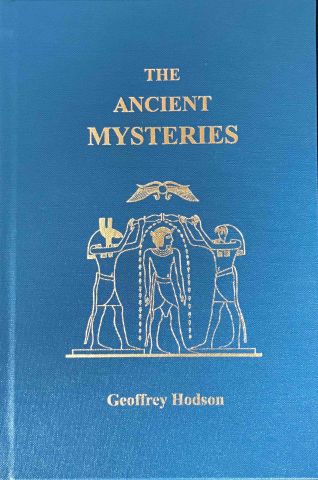 When I lived and studied in New Zealand in 1988, Geoffrey Hodson (1886-1983) had departed from our visible world a few years before, but this great exponent of the Ancient Wisdom remained a vibrant legend among Theosophists and others who knew of his prolific writing, his clairvoyant powers, his healing gift, and his dedication to Theosophy and related causes like vegetarianism, up the the end of his long life.  He seemed still a presence, a reality reinforced by the ongoing publication of talks and papers he had left behind.  The present volume is the latest in this series, and a fine tribute it is to Hodson's Theosophical wisdom and inner sight alike.   The work is vividly illustrated, including color plates, taken from ancient Egyptian art.   The editors are not named, but clearly this fine production took considerable time and effort.  We owe them a tremendous debt.

Who was Geoffrey Hodson?  He was born to a loving rural family in Lincolnshire, England.   From an early age he seems to have had remarkable perceptions in a half-dreamlike state, sometimes of strange ominous entities.  When within his parish church they were visions of a more luminous and benign character.  Although raised a devout Anglican, upon reading Annie Besant's Esoteric Christianity and hearing her lecture, he became a Theosophist in 1912, and later a Liberal Catholic priest.   After the First World War he found his calling as a lecturer and writer for the Theosophical Society, around the same time commencing to perceive the stunning apparitions of the angelic and faerie realms for which he was soon to be well known.   His beautifully-illustrated book The Kingdom of the Gods is an ever-popular classic of this unique genre.

Several of Hodson's works, however, are devoted to his clairvoyant and Theosophically influenced investigations of the past, or of symbol systems carried over from the past, like the profoundly inspirational The Christ Life from Nativity to Ascension or the Masonic At the Sign of the Square and Compass.   The present volume, primarily representing an interpretation of the myths and religion of ancient Egypt, is in this category.

Egypt, The Ancient Mysteries quite appropriately includes introductory material from other books about  the wisdom of the past,  as well as two concluding chapters on more recent developments, on which more later.   The timeless mysteries, according to chapters 1, "The Ancient Wisdom (An Introduction)" and 2, "The Mysteries of Predynastic Times," had several functions, from educational to religious, but the most significant purpose was "to hasten the natural processes of spiritual, psychological, and cultural unfoldment, to increase the speed of the evolution of Initiates." (p. 31)  In this capacity they could, like all real initiations, work on several levels, conveying the sacred message through symbol and allegory and at the same time bring the candidates through sensory -- sometimes painful -- experiences that deeply implant the event in consciousness, while opening them to an emotional and intellectual awakening that can quite properly be called "unfoldment," the opening up of a new inner state.

The bulk of this volume presents affirmations of ancient Egyptian mystery unfoldments in Theosophical language.  As an example we may take Hodson's study of the barque of Ra.   The sun boat of this supreme solar deity was said to transport the orb of light across the heavens during the day, then enter the underworld to return that luminary from west back to east.  In the lower realms, Ra must defeat Apep, a monster embodying chaos who appears as a giant serpent, before returning to our skies; the battle is waged every night, and every night Ra wins.

According to Hodson's Theosophical usage, the macrocosmic meaning the the barque of Ra is that it is Ring-Pass-Not of our Solar System, centered in the Solar Logos which appears as the Sun, but including our Earth and all other worlds subject to that mighty being.   The esoteric ship does not actually move, but appears to do so to those who wrongly think the sun rather than the earth is in motion.   Apep represents the material substance of the universe, Prakriti in Sanskrit; the greater power known as Purusha shapes that jumbled mass into forms, and so as Apep is always overcome by the god.   (p. 124)

In the microcosmos, the barque of Ra is the Auric Envelope for the Monad or Causal Body, here symbolized as Ra, that sun within us which is everlasting and reincarnates from one vehicle to another.   On this level the place of Apep is taken by Set, the chaotic desert-deity always in opposition to Osiris, Isis, and Horus, the figures of light and order.   Much else is interpreted in this way, not only the major Egyptian divinities but also such mystery-laden edifices as the Great Pyramid, a place of initiation, and the enigmatic Sphinx.

It must be acknowledged that Hodson's decodings would probably not be shared by most mainstream Egyptologists.  That hardly seems to be a problem, however.   All myths and symbol systems of any importance have been construed in numerous ways, from those of ancient allegorists to modern psychoanalysts, and this only asserts the eternal power of the original image.   Cultures new and old, near and far, including the Theosophical, read them in terms of their own worldviews and needs.  Insofar as Theosophy sees an Ancient Wisdom behind the forms projected onto the screen of consciousness by each in its own way, one can rightly compare and translate.  Hodson does this magnificently not only in this book, but in his similar esoteric studies of the Bible, world mythology, and traditions like Freemasonry.

The Ancient Mysteries ends with a couple of chapters on "The Mysteries in More Recent Times" -- more recent, that is, than ancient Egypt -- and "Exploring the Mysteries in Modern Times."  The first offers brief glances into occult moments in Crete, Greece, the writing of the Gospels, and "A Group of Jewish Rabbis of the Early Christian Era."  They are actually accounts of visions Hodson observed as he looked down the centuries to those important times and places, plus short accounts by his own inner teacher, the Master Polidorus Isurenus, of Egyptian ceremonies and the Master Jesus.

The chapter on the mysteries in modern times gives us the Theosophical Society, and particularly affiliates such as the Co-Masonic Order and the Liberal Catholic Church, as settings for today's mystery rituals.  It goes on to deal with methods of training today in contrast to ancient, with dangers inherent in mental development, and "the path of men and women in the world."

The book then concludes with valuable and extensive glossaries and bibliographies, plus information on the life and work of Hodson, a piece on "The Founding of the Great Hierarchy" based on Hodson's and C. W. Leadbeater's writings, and an Index.  Much there is here to assist and enlighten the diligent docent of the mysteries, together with the all-encompassing Theosophical view of the world.

The Ancient Mysteries belongs in all Theosophical libraries and on the shelves of all students of the Ancient Wisdom.    May it find the many readers it deserves.

A native of Illinois, Robert Ellwood received a Ph.D. in history of religion from the University of Chicago.   Here is now emeritus professor of religion at the University of Southern California, where he taught for thirty years.  He has also been an active Theosophist, having served a term as vice president of the Theosophical Society in America.   He and his spouse Gracia Fay lived for twenty years at the Theosophical community of Krotona in Ojai, California.  In January-June 1988 Robert and his family lived in Wellington under a Fulbright grant to study alternative spirituality in New Zealand; one result was a book, Islands of the Dawn: The Story of Alternative Spirituality in New Zealand.  He and Gracia Fay now live with their daughter and her family in Diamond Bar, California.